The rainbow boa is from the boidae family of snakes and the Epicrates genus. It is also known as the slender boa since their bodies are not as heavy as other boas.

It is found indigenous to Central and South America.

Due to its unique coloring it’s considered one of the most beautiful snakes.

Rainbow boas need heat and high humidity so they are found mostly in rain forests and tropical environments. They also enjoy the undercover offered in these environments.

They live an average of ten years in the wild. 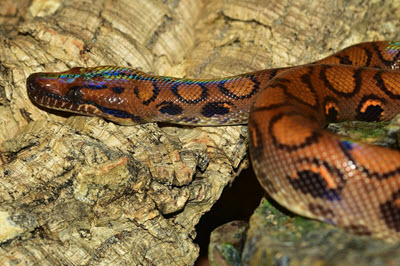 Their eyesight is not very good so they depend on their sense of smell and their ability to sense heat to locate their prey. The labial pits on their head allow them to determine the size of their prey due to the amount of heat the prey produces.

Like other boas, the rainbow boa catches its food with a bite and then constricts it until it dies. It then consumes the prey head first and it slowly moves down the snake’s body and to the digestive track.

They eat weekly when young and then every two weeks when they get older.

The rainbow boa earned its name due to the unique coloring of its skin. They have an iridescent shine with a spectrum of colors. This is caused by the snake’s scales which have small ridges which act as tiny prisms causing a rainbow like effect.

As adults they reach four to six feet in length. Females are generally larger in length and weight than males.

Like most snakes, the rainbow boa is nocturnal. It hides and sleeps most of the day and hunts for prey at night. They use their tongue to smell which is one way they find prey in the night.

When young they climb in trees, possibly as protection from predators. As they get older and heavier they tend to stay on the ground, hiding in holes or under leaves. They are also more activity when young because they need to eat more often.

They do not interact with other snakes except during mating season.

As with most snakes, their skin does not grow, so they shed their skin as they grow larger and produce new skin.

Mating season for Rainbow boas takes place between October and January. They give birth to live young, as opposed to many other snakes who lay eggs. They usually have eleven to sixteen young at one time.

Males will mate with many females.

Newborn snakes are eight to twelve inches long and can survive on their own from the moment of their birth. The young snakes strike out and bite at almost anything. This lessens as they age. 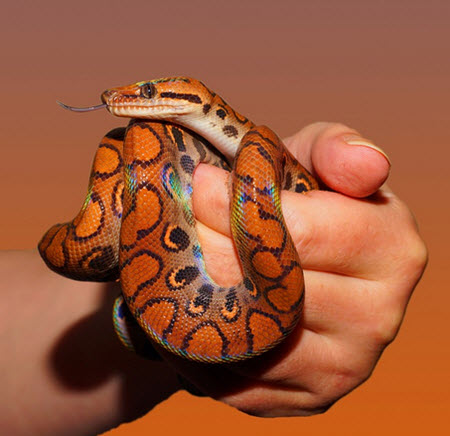 The rainbow boa has specific requirements so it’s not recommended for new snake owners. It needs a high heat and high humidity environment to survive.

They are known to be docile pets who adapt to regular handling by their owners.

Snakes are well-known for their ability to escape any tank and the rainbow boa is no exception. It’s best to purchase or build an enclosure that is designed to keep your snake safely inside. These enclosures will also have a place to house the heat lighting your snake will need in an area that the snake cannot access.

The rainbow boa needs a high humidity environment to survive, usually 70%. Without this they will dehydrate which is a serious health issue.

Temperature in the enclosure should be mid to high 80s during the day and 70s at night. Use a thermostat to accurately determine temperatures, do not guess.

When full grown a rainbow boa averages five feet. The enclosure needs to be large enough for him to move around comfortably.

A half log or box is good for a hiding spot.

High grade cypress mulch makes a good flooring because it holds humidity without getting moldy. 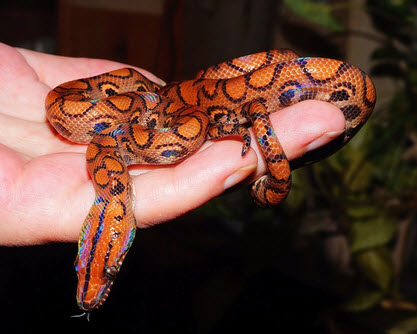 Your rainbow boa will need to be fed a diet of small rodents. These can be purchased frozen from companies who raise the animals for this purpose.

When your snake is young it will need to be fed weekly but as it grows every two weeks or once a month will be enough.

The prey should never be larger than the mid-section of your snake.

Always wash your hands before and after feeding. Leave your snake alone after feeding so it can peacefully digest its dinner.

Your snake should always have access to fresh water. Since they like to curl up in their water dish and sometimes defecate in the dish, the water needs to be changed often.

It’s important to check out your snake carefully before you purchase. If possible, take the snake to a vet for a check-up before purchase or if you order online, as soon as your snake arrives.

A healthy snake has smooth skin, clear eyes, and no discharge around the eyes or vent. It will not hang limply when you hold it in your hands.

A rainbow boa can live up to twenty-five years in captivity so it is a long-term commitment.

Purchasing the snake is only the beginning of the costs of snake ownership. You will need to buy the enclosure, provide an adequate diet, and find a vet for annual check-ups and when problems occur.

Always buy a snake that has been bred in captivity, not taken from the wild. It will make a calmer pet and there is less risk of disease. Purchase from a reputable dealer.

If you buy your snake online make sure it will be shipped overnight. Your snake should not be in transit for longer than twenty-four hours. Be sure someone will be home to take delivery of the snake.

Because these snakes are so uniquely beautiful they are sought after pets. But do your research in advance so you know what is required to keep your pet safe.