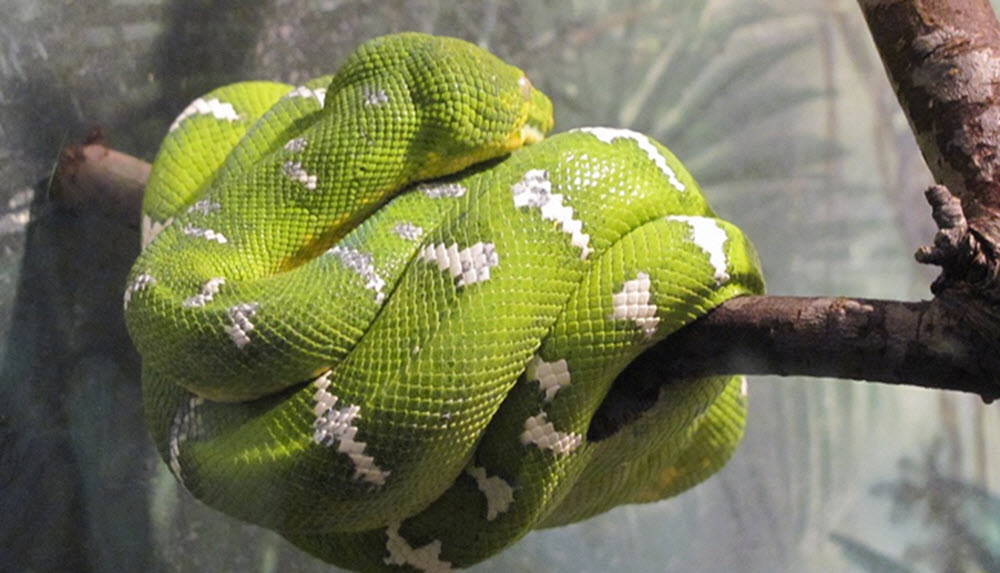 The emerald tree boa acquired its name due to the unique green color of the adult snakes. They are indigenous to South America.

The emerald boa lives mostly in rain forests. They are arboreal which means they spend most of their time in trees.

Emerald boas are carnivores. Their diet consists mainly of small rodents, and occasionally lizards or frogs.

Some people think that since these snakes live in trees that they eat birds but this is rarely true. The rodents and lizards they eat live in the trees where the snakes reside.

Because their metabolism is so slow they often go longer between meals than other snakes. Sometimes two or three months.

The emerald boa gained its name due to its bright green color. However, when they are born they are more orange or red. They turn green when they are nine to twelve months old.

They have white markings that resemble lightning bolts along their mid-section and their bellies are yellow.

As adults they reach an average length of six feet.

Their teeth resemble the teeth of dogs and are the longest, proportionally of any non-venomous snake.

They are similar in appearance to the green tree python.

The emerald boa spends most of its day in trees and are rarely on the ground except to move from one tree to another.

They are solitary and do not live in groups. They only interact with other snakes while mating.

Like most snakes, they are nocturnal and hunt for prey at night. They have pits around their mouth that allow them to sense heat from their prey.

Like other boas, the Emerald boa gives birth to live young. There are usually ten to fourteen with each litter.

Because of their striking green color, these snakes are popular pets. However, they are not the best choice for new snake owners due to often having a bad temperament and eating problems.

There are two main varieties; the Amazon and the Suriname. A captive born Amazon is considered the best option for a pet since it is usually tamer.

When keeping a snake as a pet, including the emerald boa, it’s always best to buy or build an enclosure specially made for snakes. Though a fish tank might work when the snake is small, it’s not ideal. Snakes are notorious for their ability to escape so they need enclosures with secure tops.

Also, the enclosure needs to have a separate space for heat lamps that the snake cannot reach. Otherwise the snake can wrap itself around the light bulbs and suffer burns.

A humidity level of 80% to 90% is needed. A humidifier is sometimes required to reach this level. Misting in the morning and evening is also a good idea. The level can drop to 60% to 70% at night.

The temperature in the enclosure should be around 82% to 85% in the day and 75% at night. Since these snakes normally live in trees in the wild they are used to cooler breezes than most snakes.

They can grow to lengths of six to seven feet as adults so they need a large enclosure. You can start with a smaller one and then move the snake to a larger space as it grows.

Ideally, the emerald boa needs a tall enclosure that allows for large limbs and branches to climb.

A diet of small rodents is best. They can be bought frozen from companies online if you can’t find a local source. Food should be thawed before feeding it to your snake.

Mice should not be larger than the diameter of your snake.

Young snakes need to eat every seven to ten days and an older snake every month.

A major problem with Emerald boas is they sometimes have the problem of regurgitating their food. Once they start, it’s a difficult problem to stop. This is sometimes a sign of the temperature in the enclosure being too high. Take your snake to the vet if this problem persists.

Never feed your snake mice that you capture because they can carry diseases.

Always was your hands carefully before and after feeding your snake.

Your snake should always have access to water. It will need to be changed often since they sometimes like to lie in their water dish and will sometimes defecate while there. Water also helps add to the humidity in the enclosure.

Things to Consider before Purchasing an Emerald Boa

An Emerald Boa has a life span of fifteen to twenty years in captivity so be prepared for a long-term commitment.

Never attempt to make a wild caught snake a pet.

Before purchasing any snake be sure you have the resources to give it the proper care. Beside the purchase price you’ll need a proper enclosure, an ongoing rodent diet, and vet care. This can be especially true for the Emerald Boa since it sometimes has digestive problems.

Find out where the closest veterinarian is that sees snakes. Many vets only care for cats and dogs so you need to know in advance where you’ll take your snake for care.

Be sure you know where to find food for your snake. Will your family be okay with sharing freezer space with dead rodents? This is not something you want to find out after the purchase of your snake. Talk to your family in advance.

No matter how tame your snake may appear, it is still a wild animal by nature. For this reason, it’s probably not the best pet for a family with small children. Children should never be allowed to handle a snake, or even be left in the room with snake, without adult supervision.

Do as much research as possible before purchasing your snake. Join local clubs or visit online forums and talk to owners of the Emerald Boa.

These snakes are beautiful and can make good pets but you need to know what you’re doing before taking the plunge.